Is it Really "Alopecia?" 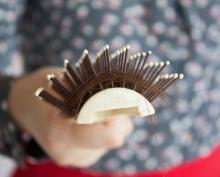 “How do I know this is alopecia?”

“I don’t have an official diagnosis—is it still alopecia?”

“I have diffuse loss—could it be alopecia and will your program help me?”

“I have female pattern baldness—is this alopecia?”

It’s all “alopecia” because the medical term for hair loss (any pattern—total, patchy or diffuse) is “alopecia.” But many medical experts refer to alopecia specifically as autoimmune hair loss. The term is used somewhat loosely and interchangeably, which can be confusing.

I’ve worked with a few clients with female pattern loss, also known as female pattern baldness (FPB) or androgenic (or androgenetic) alopecia. Some in my Reversing Alopecia course have this specific pattern, which is the most common form of hair loss for women.

It typically shows up as thinning along the top part (sometimes to the point of baldness in that area), thinning on the sides (mostly around the temples), and diffuse loss elsewhere on the scalp.

One misconception is that female pattern loss causes a receding hairline similar to men. This isn’t usually the case—if a woman is losing hair along her hairline at the forehead, it’s often frontal fibrosing alopecia, which may or may not present with visible scarring or a fibrous look to the skin in that area.

I know, it’s enough to make you want to throw your hands up. BUT…many of the same strategies help to improve alopecia, no matter what the pattern. Yes, you read that right.

And yes, androgenic alopecia is somewhat of an outlier in that it’s largely associated with androgenic hormones (DHEA, testosterone, and DHT), but I’ve found that this doesn’t tell the whole story for many with the androgenic pattern—they also need to address things like systemic yeast, hydrochloric acid status, blood sugar status, estrogen dominance, and low ferritin, to name a few. (All “deal breakers” in getting your hair back.)

Additionally, those with patchy or total loss can also have an androgen imbalance.

Doctors frequently tell people suffering from alopecia patterns such as areata, totalsis, universalis, or ophiasis, that “there’s nothing to be done about it” or that we have to “live with it” (if they’re not already prescribing questionable drugs that can make the situation worse in the long term). And they say the same thing about androgenic alopecia, even though they consider it somewhat separate from the other patterns. (And again, it is an outlier to some degree.)

Here are some specific—and often unknown—factors to consider for the androgenic pattern:

Again, most of the women I’ve worked with who have the androgenic pattern have more going on than just an androgen imbalance. For example, they’re often estrogen dominant and diffuse hair loss is one of the hallmark symptoms of hypothyroidism/Hashimoto’s and there’s often a thyroid imbalance thrown in there.

And yes, genes play a role, but we have the power to turn bad genes off and turn good genes on with the powerful and exciting science of epigenetics.

If you have the androgenic pattern and you’ve gotten nowhere, take heart. The good news is there’s much more to it than you’ve likely been told—you don’t have to JUST obsess about androgenic hormones. And these other contributing factors, once brought to light, can often be managed.

When they are, and the inflammation (which also causes miniaturization) in the follicles is reduced, it’s entirely possible to see a lot of improvement. Addressing these imbalances along with androgen management can also have a FAR-reaching and positive impact on the whole body.

Go here for my alopecia interview with Alopecia Life >

Go here for my alopecia interview with Rebuilding My Health >

Any thoughts regarding hair

She knows her stuff and it’s clear that she has done a lot of work to build a library of knowledge she can draw upon for just about any question or issue that comes up. I wish I could keep Jill and her words of wisdom in my back pocket for life!