Alopecia: Is There Hope? 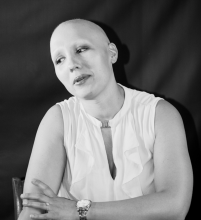 It’s not easy to be bald, especially as a female.

If your eyelashes and eyebrows have fallen out, it’s an even bigger blow to your sense of identity.

Nor is it easy to have bald spots or allover thinning, even if you can mask it with curls or a specific hairstyle. Because the underlying drumbeat is, “Am I going bald?”

[Update: You can read testimonials from participants of my Reversing Alopecia Masterclass courses here.]

Then you’re told by an ill-informed healthcare provider that alopecia and hair loss are caused by stress. As if you’re not already stressed enough about your situation – then you have to stress that your stress is making things worse.

Stress can be a contributing factor in alopecia, but the “stress causes alopecia” mantra is hardly cut and dried. Yes, stress and trauma are thought to be some of the primary causes of telogen effluvium (TE), but many healthcare providers don’t understand the difference between TE and alopecia diffusa or TE and androgenic alopecia.

Many with alopecia, especially those with long-term baldness, have lost hope. They’ve “tried everything.” Many have invested thousands of dollars in pills, potions, creams, shots, wigs, and empty promises.

I’m here to tell you that there is hope.

And I’m not going to sugarcoat it. Getting your hair back takes work.

As I like to say, “Reversing alopecia is an inside job.” Quick fixes don’t exist. I don’t have a magic pill or potion for you.

Re-signaling your follicles takes a change in diet and lifestyle that at first, may seem overwhelming, but ultimately leaves people with a new lease on life.

Treating alopecia as the autoimmune condition that it is (for the majority of sufferers) can not only significantly reduce in the possibility of a “kaleidoscope of autoimmunity” or MAS (Multiple Autoimmune Syndrome, defined as “the combination of at least three autoimmune diseases in the same patient”) but also has a ripple effect on the entire body – a reduction in systemic/cellular inflammation (the root of all disease, according to the functional medicine community), weight loss, improved digestion and nutrient assimilation, clear skin, alleviation of joint pain, better sleep, alleviation of depression and anxiety, and an entirely new outlook on life.

I’ve been doing a great deal of thinking about alopecia and – hope.

Firstly, for 35 years, I’ve hoped that I wouldn’t go bald. With a close family member who’s suffered from alopecia universalis (not a strand anywhere), I thought that it may be my destiny, especially after last summer, where things got worse than they’ve ever been.

But it hasn’t happened. I still have my curls and I have regrowth on most of my existing spots.

Secondly, the mother of one of my alopecia clients, after her daughter re-grew her hair, spoke to an alopecia support group in her town to talk with people about how there are answers to this devastating condition.

Here’s one of our recent email exchanges, edited for brevity only. Names have been changed upon request.

Carolyn: “There were about 17-18 adults and children at the meeting. All were very interested in our story. The mindset has been heavily influenced by conventional medicine. I heard things like, ‘We’re just trying to live our lives and whatever happens, happens.’ No hope. And, ‘It’s too late for me, but maybe the children will get some results.’”

Me: “I have so much to say here. There’s so much hope, as you know. Your email just told me what my first alopecia newsletter is going to be about. I’d been struggling with ‘where to start’ and this is where I’ll start — offering hope. And I’m wondering — if people feel like there’s no hope, why did they show up? No judgment, of course, just curious.”

Carolyn: “So…let me rephrase. I think this is a huge emotional subject otherwise we wouldn’t need support. Right? People are trying to be strong and confident despite being bald. If pressed, I think they would all say they want hair. They’re trying to live with the situation at hand.

“Megan knows all too well how it feels to be hopeful and have those hopes crushed by yet another doctor/practitioner who really doesn’t know how to address alopecia. She’s still waiting for her hair to fall out again.

“Letting your guard down makes you vulnerable. If you stay in the mindset of, ‘This is okay, everything’s fine,’ then you don’t go to those scary places of, ‘What if it works but what if it doesn’t?’

“Personally, down deep, I think it’s so difficult for people to be bald, just being around others who know what they’re experiencing is comforting. Like, ‘I’m not in this alone.’

“I think people want cures but they’re afraid to believe that something like healing the gut such a big part of the solution. Doctors poo poo it. Doctors don’t understand it. For goodness sake, the NAAP website in the first two paragraphs paints a very dismal picture. Even the treatments on the NAAP website all treat symptoms.

“This was an emotional meeting for me. Seeing those bald heads took me right back to when Megan was suffering.

“I don’t want to be too pushy. I know you don’t want me to either. I just want them to at least try what we’re doing.”

The “what” that Carolyn is referring to – and how Megan and my other clients have started to see their hair re-grow – is largely based on the fact that autoimmunity is all one disease.

I want to say it again. Autoimmunity is one disease, not 90-some separate diseases treatable with symptom management alone.

Yes, there are some specific considerations for all manifestations of autoimmunity.

And my newfound “alopecia practice” isn’t simply based on my experience as an alopecia sufferer. It’s also based on my deep knowledge of autoimmunity as one disease and how addressing any manifestation of autoimmunity will likely address others – and reduce the risk of MAS.

And it has worked for the vast majority of my clients. I’m currently working with several people who are “in it” – they’re in their healing phase, so we’re waiting to see what happens, knowing that it can take up to three months – and sometimes longer – to see scalp regrowth.

I never make promises. Again, I’m not offering you a quick fix. It doesn’t exist.

I tell everyone that my protocol may or may not work. I provide all the tools I know that help to re-signal the follicles and then we let things ride.

Here’s an email I received on Nov. 11 – this young girl and I finished our program together on Aug. 24, so 11 weeks prior.

“Hi Jill! Great news! Natalie’s hair is growing in. The spot on her head that continued to grow to about 2” x 3” after two spots grew together are now almost completely covered with new growth. The hair is also growing in at the nape, which makes me happy. Her eyebrow also has new growth so I’m super hopeful that will fill in soon. I just want to cry tears of joy. Thank you so much for all of your support!”

It’s important to note that for many people, reversing alopecia is a two-phase process. First, for those who aren’t already bald, you want to stop the inordinate loss. Then, resignal the empty follicles for growth. Once you begin to see less loss, you know you’re on the right path.

One client I’m currently working with said in our coaching session last week, “I’m certainly losing a lot less hair. There are way fewer hairs on my navy blue pillow case in the mornings.”

Just this morning, a client said, “I’m seeing some fine dark hairs growing on the right side of my head. Does that mean I’m making progress?” I replied with a resounding, “Yes!”

No matter where you are with hair loss/alopecia, all of this is possible for you, too. The only type of alopecia that I don’t claim to help with is cicatricial alopecia (scarring alopecia). It’s a rare condition where the follicles have been replaced with scar tissue, although there’s some evidence that a laser helmet and the herb gotu kola can help dissolve scars.

Once the scars are gone, you’d have to think that the follicles can be signaled, just like any other form of alopecia. It’s certainly worth a try! Despite what the medical/dermatology community will tell us, I refuse to believe that any of us have to “live with it.”

I agree with the others...you

I agree with the others...you are the person to teach us about alopecia. You have a personal, physical, emotional stake in the topic. This isn't theory for you, it's real.

Here's the hope I have to offer, my daughter lost her hair completely 3 1/2 years ago. We started working with you and her hair, eyebrows and eyelashes grew back. Her hair is now past her shoulders and healthy. She has started to lose hair 2 or 3 times over the last year (I am convinced due to stress). BUT...nowhere near the amount of hair has fallen out as before. If we had not changed her diet, gotten the chemicals out of the house and her body, supplemented with histamine digesting enzymes and other key supplements, I don't know if her body would have been strong enough to hang on to the hair. In other words, you helped us reduce the internal inflammation so her body could handle the stress.

We are continuing to work on reducing her cortisol by increasing her ability to cope with stress. Where would we be without you? Maybe bald again. But we're not.

what are digesting enzymes?

what are digesting enzymes? Is that probiotics?

Elaine, digestive enzymes are enzymes that help with the digestion process and probiotics are beneficial bacterium can also help with digestion and digestive health in general.

Jill has gathered a lot of incredible information in a tidy little “package” that’s totally doable and very educational.