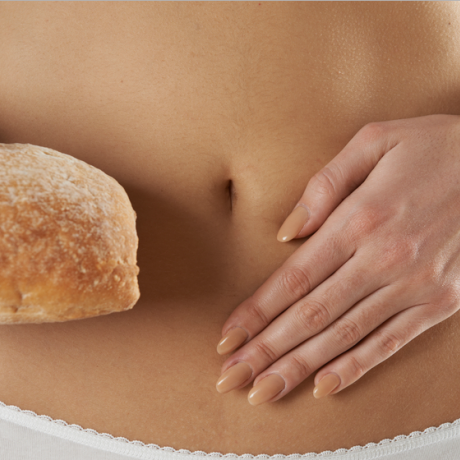 A few weeks ago, I wrote about emerging evidence that endometriosis, a condition where tissue that’s normally found in the uterus is found outside the uterus, is an autoimmune condition.

More support that the condition might be autoimmune? We now know that ditching gluten can help resolve the painful symptoms of endometriosis.

Endometriosis or not, gluten is one of the worst autoimmune offenders.

Here’s why: when gluten enters the small intestine, it triggers the release of zonulin, a protein discovered by gastroenterologist Alessio Fasano in 2000.

Zonulin regulates intestinal permeability. That’s a fancy way of saying that gluten tells the body to produce a chemical (zonulin) that loosens the tight cellular junctions of the intestinal walls. Imagine that the intestinal walls are coffee filters and zonulin causes small rips in the filter.

In other words, you want your cellular junctions “tight and right.”

When these rips persist and don’t heal, it leads to leaky gut syndrome because food particles, toxins, bacteria, and other pathogens seep through the intestinal wall and float freely through the bloodstream. The immune system (rightly) identifies these particles as invaders and attacks them.

Not only does this result in chronic inflammation, but the overtaxed immune system gets confused and starts attacking the body’s own tissues – it has lost its ability to differentiate between self and non-self.

“Leaky gut is one of the primary triggers for all autoimmune disease,” writes functional medicine pioneer, Amy Myers, MD. (Italics are mine.)

[Now available: the #1 best selling cookbook, The Essential Thyroid Cookbook: Over 100 Nourishing Recipes for Thriving with Hypothyroidism and Hashimoto’s.]

Even if science eventually determines that endometriosis isn’t autoimmune (though I don’t think that will happen), existing research already suggests that going gluten-free can help. When the most common conventional treatment for endometriosis is surgery – and giving up gluten is profoundly less invasive, dramatically less expensive, and intrinsically healing for the whole body – the question becomes: if you suffer from endometriosis, why not try ditching gluten?

One caveat: I’m not saying that surgery is never warranted. Sometimes it’s not only extremely beneficial, but absolutely necessary. What I am saying is: what’s the harm in also ditching gluten?

Following a complete immune modulating protocol requires more work, time, and personalization than just giving up gluten (since everybody is bio-individually unique, even when the diagnosis on paper is the same), but ditching gluten is the first and best place to start. In fact, some can get their Hashimoto’s managed simply by going gluten-free.

As an aside, and to the point that gluten touches, in our opinion, all manifestations of autoimmunity, Jill’s new primary focus in her practice is alopecia (autoimmune hair loss), as you may know.

A few months ago, she began working with a client whose eyebrows, eyelashes, and bald spots began regrowing. Later, this client started to plateau, and even lose a little of the hair she’d grown back, although her eyebrows and eyelashes stayed intact. Upon digging deeper, Jill helped her identify a hidden source of gluten that she’d been eating and now, this client not only has full eyelashes and eyebrows, but she also has hair growing over the entirety of her bald spots.

What autoimmune condition does gluten NOT touch?

I'm curious, what was the

I'm curious, what was the hidden source of gluten?

She thought that couscous was

She thought that couscous was a rice, not a gluten-containing grain.

I realize that I should have

I realize that I should have used the word “unknown” vs. “hidden.” It was an unknown source of gluten, for her, but not necessarily hidden.

I discovered only a few weeks

I discovered only a few weeks ago that most gummy candies, and most all candies in classic candy shops, contain gluten. I was eating gummy worms and other gummy candy occassionaly, like Trader Joes gummy penguins and i couldn't believe i had assumed gummies were ok.

I am very confused by the

I am very confused by the reply here that says "she thought that couscous was a rice, not a grain."  Rice *is* a grain, so that sentence makes no sense at all to me.

Right, sorry, I should have

Right, sorry, I should have said, *gluten-containing* grain. I just edited my comment.

hehe, people are picky eh! I

hehe, people are picky eh! I understood what you were saying. Great article as always. I have ditched gluten (Hashimotos) and feeling much much better 6 months in! My antibodies have come down so doing another test in half a year, I'm hoping to reverse my condition!

Jane had a legitimate

Jane had a legitimate question. :)

I was diagnosed in 2014 with hashimotos, and have only recently started modifying my diet to help my symptoms. After 2 months gluten free I feel much better, but some articles I have read on Hashimotos and diet say that nightshades, tomatoes, can also excacerbate autoimmune disorders. Is this true?

It really depends on the

It really depends on the person and following an immune-modulating protocol is one of the best ways to find out. I’m really glad that ditching gluten helpd your symptoms! Most people notice a dramatic improvement when the give up gluten-containing grains.

I found Jill and Healthful Elements one evening while I was on the web searching desperately for answers that would alleviate my then-debilitating physical symptoms which included a slow thyroid, extreme exhaustion which did not go away by sleeping or taking days of rest, mind fog, intestinal pro