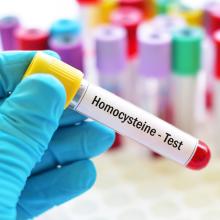 Generally, it’s good to get at least 2-3 inflammatory markers tested, including not only homocysteine, but also SED rate (sedimentation rate), EOS (eosinophils), and/or CRP (C-reactive protein).

Today’s post is about how elevated homocysteine is an important contributor to Alzheimer’s disease. Additionally, it’s a factor in cardiovascular disease, stroke, and even some cancers.

It sounds like having an optimal homocysteine level is a good idea.

So, what does homocysteine measure and how is it related to Alzheimer’s?

Alzheimer’s occurs when the synapse-making signals (the point at which a nervous impulse passes from one nerve/brain cell to another) are outnumbered by the synapse-remodeling/destroying ones.

There are 3 causes of synapse loss:

Homocysteine is a marker of both the first and second factors listed above, but it can also increase when nutritional support is suboptimal.

But wait…aren’t those foods healthful unless you have a specific allergy to them?

Methionine is converted into homocysteine, which is converted back into methionine or cysteine, also an amino acid. This conversion requires Vitamins B12, B6, B9 (folate), and the amino acid, betaine.

(Vitamin B12 is often part of a functional thyroid panel—and low B12 can be a tip-off to elevated homocysteine/high inflammation.)

You’ll have no difficulty cycling your homocysteine if you have healthy levels of these B vitamins. But many don’t, which allows homocysteine to build up, often damaging the blood vessels and the brain.

Can’t remember what you had for breakfast?
Lose your train of thought in the middle of a sentence?
Have difficulty finding the right word although it feels like it’s on the tip of your tongue?

It could be your hippocampus.

I repeat…it sounds like having an optimal homocysteine level is a good idea.

If your homocysteine is over 6 micromoles per liter, then what?

Many foods contain the recommended B vitamins and betaine. Normally, “food first” is my recommendation. However Dr. Dale Bredesen recommends a low carb, low starch, vegetable-heavy, gluten-free, dairy-free, smaller-portion-of-meat diet. Many of the foods rich in B vitamins do not fall in this category.

If you’re unable to lower your homocysteine through diet alone, supplementation may be necessary. If you determine supplementation is needed, B vitamins are widely available through Healthful Elements’ Fullscript online dispensary and other quality sources. (You can create a Fullscript account here and we love MegaFood’s Balanced B Complex.)

A few years ago, my homocysteine was over 11. Dietary changes and supplementation reduced my levels to below 7, where they should be. And remembering what I had for breakfast is no longer an issue.

I have been fighting high

I have been fighting high homocysteins for 2 years. I have gotten it down from a 22 to a 14. But it won’t budge past that. I take a b-12 shot once a week and take homocysteine supplements daily. I have done almost everything to get it down. My doctor thinks it’s the MTFR gene. Any suggestions?

I will share what Dr. Dale Bredesen recommends in his book The End of Alzheimer’s. This is taken directly from his book: (as always, please talk with your doctor about this protocol and the concern of MTHFR)

Dr. Bredesen recommends activated forms of the suggested vitamins if you have a biochemical makeup that makes it difficult for you to convert the vitamins you take into the active form that your body can use. Possibly MTHFR is at play if you are not able to receive benefit from your supplements.

If homocysteine is above 6 start by taking the following:

methylcobalamin (methyl-b12) and adenosylcobalamin forms of B12, 1mg in total each day

methyltetrahydrofolate (methyl-folate) starting with 0.8 mg (and as high as 5 mg) each day

If not reduced to 6 micromoles per liter or lower simply add 500 mg daily of glycine betaine (also called trimethylglycine, available in capsule form).

If it is still too high, reduce methionine in your diet by limiting consumption of foods such as nuts, beef, lamb, cheese, turkey, pork, fish, shellfish, soy, eggs, dairy, and beans.

You may have already tried this approach. This is a general recommendation that should be discussed with your practitioner to see if it suites your health challenges.

Working with Jill was such a wonderful, positive, and educational experience. I learned, grew, and now feel healthier than ever. Jill has the unique ability to connect and build a great rapport and then provide such great support.