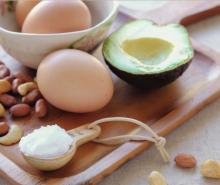 I realize that you’re likely hearing about weight loss from all angles right now. It’s that time when weight loss programs, promotions, and promises abound. It’s enough to make your head spin—so much so, that many who are looking to lose weight get trapped in analysis paralysis and make little to no headway.

Keto? Vegan? Juice fasting? Low carb? An elimination diet? Low glycemic? What do I do?!

I’m not jumping on the “how to lose weight” bandwagon. This isn’t about resolutions (I have nothing against resolutions). It’s that I’ve been getting a fair number of questions about my opinion about the ever-popular ketogenic diet—the extremely low carb, high fat diet that many people are adopting.

“Dear Jill, I’m loving your cookbook and your grounded, practical, and refreshing approach to carbs. I have Hashimoto’s and like you, I’ve never felt that eliminating whole food groups was the way to go and I’ve been loving your recipes. That said, I’ve been stuck with an extra 30 lbs for well over two years. I’m so sad about this and I don’t know what to do. All of the information about weight loss is overwhelming me. I know that carbs are important for all the reasons that you listed in the book, but I have to admit that I’m thinking of going keto, at least for a while, to see what happens. I would love your opinion about a short-term keto diet.”

At the end of the day, there are many ways to lose weight without deprivation and restriction.

And I know that diet (not “dieting”) is about 80% of the battle. Sure, we want to move, but what and how you eat plays the biggest role in becoming a hotter metabolic burner.

What I’m not a fan of—and what often comes back to haunt people—is going on a diet (whatever that may mean) without first addressing some underlying factors that cause people to gain weight or be weight loss resistant in the first place.

If these issues rage on, your best efforts at dieting (whatever that may mean) may yield no results or perhaps some initial results with a subsequent plateau.

I’ve been clear for years that I don’t have a “weight loss program.” That said, in my work with clients, I’ve helped many people lose weight—sustainably—addressing the above factors.

When you focus on health vs. weight, the body tends to take care of things and often, people start to feel their clothes get looser in a week to 10 days. Or so.

But back to the ketogenic diet…

Admittedly, when I read just how low carb the keto diet is, it kind of makes the hair on the back of my neck stand up. After all, several years ago, I outlined in this post why carbs are an important part of a healthful diet.

Additionally, there’s a chapter in my Essential Thyroid Cookbook called “Low Carb: A Disaster for Those with Hashimoto’s,” where I explain how low carb diets can be too low in fiber (not good) and how when it comes to low thyroid function specifically, going low carb can lower T3, your active thyroid hormone; increase Reverse T3 (RT3), which acts against thyroid hormone production; make thermo-regulation more difficult (carbs help with cold tolerance); and contribute to high cortisol.

It’s not the same as the Paleo diet (which may or may not be low carb) or Atkins, which focuses more on protein and less on fat.

In addition to weight loss, which is what most people use it for, it’s also been shown to starve cancer cells, help manage epilepsy, improve mitochondrial function, and protect against neurodegenerative diseases like Parkinson’s and Alzheimer’s.

I don’t know that anyone could argue with these benefits.

It works. That’s the short story.

What also works is a low-carb, non-keto diet.

But I don’t want to talk out of both sides of my mouth and say that “it works” and that “it’s a disaster.”

I feel that it’s a disaster long-term. I think that going keto for short stints is probably fine—perhaps 3-4 weeks, which is long enough to reset fat-burning, after which, I feel that people should reintroduce a moderate-carb diet.

To further explain why I may sound a little contradictory about carbs, in my cookbook, I said, “Lisa and I chose to take the long view with this cookbook—we want it to be a cookbook for the ages.” Keto isn’t “for the ages,” but again, it may make you a fat-burning machine in the short-term.

I don’t feel that being in ketosis for a short time is going to slow thyroid function so substantively as to cause a flare, but please don’t take my word for it. The key is to monitor how you feel. And work with your doctor.

Additionally, as stated above, you can go low carb without being in a state of ketosis, which may work just as well. Given the concerns about long-term use of the ketogenic diet, this is where I lean, with the understanding that I’m certainly not advocating a long-term low-carb diet, keto or not!

Finally, as Dr. John Douillard states, “…most of the side effects and complications of a ketogenic diet were from long-term, not short-term use.”

He continues, “Studies have found that long-term use of a ketogenic diet can cause arterial stiffness. Other side effects include dehydration, gastrointestinal disturbances, such as nausea, vomiting, diarrhea, constipation, gastritis, and fat intolerance. Long-term use may increase the risk of osteopenia, renal stones, cardiomyopathy, secondary hypocarnitinemia, and iron-deficiency anemia.”

There’s the saying, “a reason, a season, or a lifetime.” When it comes to weight loss specifically, I feel that keto should be used for a reason. If you’re someone who’s considering keto for the other medical reasons listed above, work with your doctor on the right approach and duration.

And for the sake of full disclosure, I own a ketogenic cookbook. I don’t cook from it exclusively, of course, but there’s no denying that healthful, whole fats are delicious and satisfying. I get too cold if I go low-carb, so I just pair the dishes with a small side of sweet potatoes!

Thank you for this. I'm SO

Thank you for this. I'm SO stuck at 28lbs more than I like to be. Energy levels not bad considering how sleep-deprived I am so think my thyroid can't be too bad, and have been feeling intuitively I should cut carbs at least a bit, and my instinct as a vegan is to up my consumption of olive oil, avos, nuts etc.

Your post is really helpful, and I love the cookbook too btw.

Jill has been tremendously helpful in getting me through my low energy, fatigue, mental fog, achy joints & muscles, excessive hot flashes, insomnia, inability to lose weight, and a host of other symptoms.