What is “Real” Vitamin A? 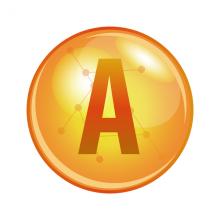 This post is adapted from a section in my best-selling Essential Thyroid Cookbook. Enter your name and email to the left (scroll down a bit) for a sample cookbook.

When themes emerge, I like to write about them.

And the topic of Vitamin A has come up quite a bit lately, mostly in my alopecia practice. While the majority of this post is about how Vitamin A is beneficial for those with Hashimoto’s, it’s also helpful for those with hair loss.

No matter someone’s condition, there’s some confusion about what “real” Vitamin A is, which I want to fully explain here.

Firstly, if you suffer from hair loss, there’s a specific consideration for Vitamin A supplementation you should be aware of. I take a food-first approach and for the most part, I’m not in favor of supplementing with isolated vitamins and minerals. There are exceptions, of course, like possible magnesium or zinc.

Let’s get this out of the way first and then get into all of the benefits of Vitamin A, including the difference between retinol and carotenoids. This is important!

Okay, the short story is that Vitamin A over-supplementation is a known cause of hair loss.

I learned this years ago, when I was half bald and began working with Dr. Greg Plotnikoff. One of the very first things he asked me was, “Are you supplementing with Vitamin A?” I wasn’t.

He went on to say that it’s the retinol palmitate version of Vitamin A that’s a specific problem—it can cause toxicity and alopecia is a known symptom.

More than 10,000 IU/day has been associated with toxicity and hair loss isn’t the only issue—it can also cause night blindness, irritability, and blurred vision.

To be clear, Vitamin A isn’t a toxin itself. You only run the risk of overdosing with supplementation, not Vitamin A as beta-carotene or retinol in your diet, which, in addition to the thyroid benefits outlined below, supports the production of sebum, an oily substance that moisturizes the scalp and keeps hair healthy. It helps create shiny hair because it works with the fat synthesis in the hair follicles and promotes growth.

Go here for my post, Alopecia: The Role of Micronutrients >

The term “Vitamin A” refers to a broad group of related nutrients including retinoids such as retinol, and carotenoids such as beta-carotene, astaxanthin, and lutein, which are inactive forms of Vitamin A that are ideally converted into retinol, the bioactive form.

Beta-carotene is found in orange vegetables like sweet potatoes, carrots, pumpkin, and winter squash (and dark green leafy vegetables like spinach and kale) and many mistakenly believe that if they’re eating their orange veggies, they’re getting enough Vitamin A. But this may not be the case. Why?

Firstly, the benefits for thyroid health…

It’s also a powerful antioxidant that protects the body from disease-causing pathogens and infections, which is of particular importance, given that infections, including stealth infections such as Epstein-Barr, can trigger autoimmune conditions. Vitamin A also inhibits the potentially negative effects of phytic acid found in grains. (I’m not anti-grain, at all, and there’s a chapter in my bestselling Essential Thyroid Cookbook called, In Defense of Grains.)

According to Mark Hyman, MD, “Vitamin A is critical for activation of the thyroid receptor and making your thyroid hormone turn on the genes that improve your metabolism. It combines with the active hormone T3, which allows the hormone to ‘dock’ on its receptor or landing spot on the cell.”

The thyroid requires more Vitamin A than other glands and a deficiency can inhibit T4/T3 conversion. Conversely, thyroid hormones play a significant role in the conversion of beta-carotene to retinol, also known as “true Vitamin A.” Thus when hypothyroidism is present, Vitamin A deficiency may result.

What we have here is a conversion negative feedback loop.

Low thyroid function somewhat explains why so many have trouble converting beta-carotene to Vitamin A. Ideally, the body can convert beta-carotene into retinol, or “true Vitamin A,” but only a measly 3 percent gets converted in a healthy adult. Many don’t convert at all.

The conversion of beta-carotene to retinol takes place in the presence of sufficient bile salts and fat-splitting enzymes, which many with digestive dysfunction are deficient in.

Other reasons for non-conversion include but aren’t limited to: digestive issues (extremely common for those with autoimmunity), bacterial imbalances in the digestive tract (also prevalent), elevated exposure to toxic chemicals including pesticides, stress, excessive alcohol use, certain medications, a low-fat diet, diabetes, intestinal parasites, and Celiac disease.

According to Sarah Pope, passionate nutrition educator and creator of the popular website, The Healthy Home Economist, “The biological conditions under which [conversion] occurs must be optimal meaning the person must be in excellent health with a highly efficient digestive system. Who today has excellent digestive health? Not many.”

Nutrition researcher, Dr. Michelle Kmiec, states, “If you have zero digestive issues, are in perfect health, eat at least twelve full servings of fruits and vegetables a day, allow yourself to eat ‘real’ fat, never eat processed or fast foods, and have no stress in your life, then congratulations! You may have an excellent shot at getting sufficient amounts of Vitamin A (retinol) from beta-carotene.”

Again, beta-carotene is often associated with orange vegetables—the best sources are sweet potatoes, carrots, pumpkin, winter squash, and also dark green leafy vegetables such as spinach and kale. It’s important to eat these vegetables of course, but we understand that you cannot rely solely on these foods for adequate Vitamin A and that given the importance of “true Vitamin A” (retinols), it’s wise to get Vitamin A in a form that’s readily available to the body—no conversion required.

As my Essential Thyroid Cookbook co-author, Lisa Markley, MS, RDN, said, “Both beta-carotene and retinol are important. If someone has issues with fat malabsorption, that’s problematic—they likely will convert little to nothing. But I don’t want to completely rule out carotenoids. I think there’s something beautifully important about our body being able to bio-regulate conversion of beta-carotene to active Vitamin A based on need.”

It’s possible to become a better beta-carotene-to-retinol converter by way of:

Additionally, we should be eating sweet potatoes, carrots, pumpkin, winter squash, and dark green leafy vegetables such as spinach and kale anyway. The beta-carotene in these foods provides other nutritional value beyond its potential—even if limited—to convert to retinol.

Rich food sources of Vitamin A as beta-carotene include: sweet potatoes, carrots, pumpkin, winter squash, and dark green leafy vegetables such as spinach and kale.

Thank you for this post, as always.
SO: vegans are really going to struggle to get retinol, right? Any hope?

Ok, question...somewhere I was reading that for Hashimoto's I should be avoiding dairy and eggs.  I'm not avoiding eggs because I don't eat chicken or beef and feel like I need the protein, but from what you are writing here both certain dairy and eggs are important for this whole area as well?

Hi Joanie, we don't adopt these blanket dietary statements/suggestions for those with Hashimoto's...or any autoimmune condition. It's important to determine if dairy or eggs (or another potential food trigger) is a problem for you specifically. Many with Hashimoto’s do fine with dairy and eggs. Check out this post. https://www.healthfulelements.com/blog/2012/09/foods-dont-love-you-back

Reading this page was a real

Reading this page was a real eye-opener for me.  Thank-you for writing it.  For years I thought I had vitamin A covered by eating carrots regularly.  Not so.  I had also never before seen any connection made between poor thyroid conversion and vitamin A deficiency.  To make matters worse I have 2 +/+ genetic snps in the BCMO1 gene that governs beta-carotene conversion.  I started a retinol containing supplement in February this year, and my thyroid function improved to where I no longer needed dessicated thyroid.  I would not have been aware there was any connection before reading your article.  Another hazard that could result from retinol deficiency is low ceruloplasmin which could lead to both copper and iron dysregulation.

I found Jill and Healthful Elements one evening while I was on the web searching desperately for answers that would alleviate my then-debilitating physical symptoms which included a slow thyroid, extreme exhaustion which did not go away by sleeping or taking days of rest, mind fog, intestinal pro