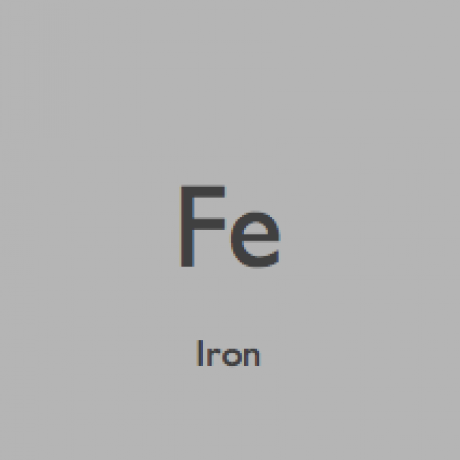 This post is the third installment in my ten-part Minerals and Your Thyroid series, where I’m highlighting eight thyroid-supportive minerals (iodine is two parts) and one troublemaker: fluoride.

Iron’s job is to transport oxygen through the body and to promote cellular growth. And it’s common for those with hypothyroidism to become low in iron.

Women are especially prone to iron deficiency because during child-bearing years, we require a great deal more iron than men.

Many of the symptoms of hypothyroidism and low iron overlap and can exacerbate one another:

If you’re low in iron, it can:

The most common cause of anemia is iron-deficient anemia.

Dr. Richard Shames states, “[When anemia and hypothyroidism are present together], the low thyroid can be partially, or totally, causing the anemia, due to sluggish production of red blood cells and sluggish absorption of iron from the intestine.”

Other factors that can lead to anemia include:

You Are What You Absorb
Iron needs an acid for proper absorption. Therefore, antacids (and calcium supplements) taken with meals can inhibit iron uptake.

With this comes a serious consideration for hydrochloric acid (betaine HCl), which is very often deficient in those with autoimmunity.

The cosmic joke is that low HCl can cause the same symptoms as an overproduction of stomach acid – belching, heartburn, and acid reflux.

If you take your concerns to a conventional medicine practitioner, they’re very likely to prescribe an acid-blocker or PPI (proton-pump inhibitor), which is the opposite of what you need and exacerbates the problem!

Low HCl is of particular concern for those with alopecia, or autoimmune hair loss, as low hydrochloric acid is a significant factor in hair follicle health. In other words, simply right-sizing HCl levels can have huge implications for slowing or reversing hair loss and promoting regrowth.

It’s not a good idea to just take HCl with each meal, ongoingly, as long-term HCl use can cause esophageal damage.

See #1 on this post for instructions on how to do a hydrochloric acid challenge with supplemental HCl (in the form of betaine and pepsin), which will help to reset your body’s ability to generate its own acid. It’s a life-changing exercise and is crazy easy.

Having a picture of your total iron status is important, especially if you’re hypothyroid and have difficulty thermo-regulating (you’re frequently cold).

It’s often assumed that if hemoglobin (red blood cell quantity and quality) is normal, iron is normal. But this isn’t always true.

Ferritin is particularly important for the body’s ability to use T3, the active form of thyroid hormone. This is why we always ask clients to get their ferritin tested along with their thyroid hormones and antibody levels.

Low ferritin is also a primary factor in hair loss.

You don’t want ferritin levels less than 30 ng/mL. If you’re hypothyroid, you want to be around 90 ng/mL for optimal thyroid function and hair regrowth.

While eating iron-rich foods is important (see list below), it’s often necessary to supplement with iron, especially in the face of low ferritin.

It’s important to supplement until ferritin (iron storage) is replenished, not simply until your serum iron level normalizes. This can take some time.

But know that the sledgehammer approach isn’t a good idea, as it’s possible to overdose on iron – it can cause liver issues. So it’s best to work closely with your doctor for the right dosing.

Floradix: Plant-based, so easy to absorb and non-constipating
(One of my clients swears that it “literally stopped” her hair loss.)

Note about Floradix: It’s in a juice base and can throw blood sugar off unless taken with food.

Speaking of nonstick, according to Leah Zerbe, “PFOA is part of a group of problematic nonstick chemicals that fall into the perfluorinated compounds (PFCs) class, a family of fluoride-containing chemicals with unique properties that make products stick- and stain-resistant.

“In a study published in the journal Epidemiology, scientists found that more than 10 percent of people exposed to drinking water contaminated with perfluorooctanoic acid (or PFOA, made by DOW Chemical) reported having some manifestation of a thyroid problem. Comparing blood levels and years of exposure with incidence of thyroid issues, the researchers were able to say that higher PFOA exposure was associated with thyroid dysfunction. The study looked at more than 30,000 people.

“Along with thyroid disease, PFCs have also been linked to cancer, infertility, birth defects, and weakened immunity.”

When my now-2.5 year old was nine months old, we found out that she was anemic at her regular check up. On some intuitive level, I’d suspected she was anemic – but not because she was failing to thrive or had any signs whatsoever of anemia. In fact, she was developing perfectly.

I’d read that babies’ ability to absorb iron from breast milk starts to decline considerably at the age of about six months and that it was important to start with even small amounts of iron-rich foods, in addition to breast milk. (We were committed to keeping her on breast milk for at least a year.)

Solid food? She wouldn’t have anything to do with it. I tried. And tried and tried…

I started spiking her milk with bone broth – about ¼ broth to ¾ milk. But I knew it wasn’t enough iron.

I started to get a little stressed. One of my friends said, “Ah, relax…babies do what they need to do in their own time.” Yeah, I know, thanks. And I very much took a relaxed attitude with most everything else related to her development, knowing that aside from any glaring problems, I didn’t need to push anything and that her body has its own wisdom.

But this iron thing bugged me.

And sure enough, she was anemic. But that’s not all – we were told that she had alpha thalassemia, a genetic blood disorder. Then I got really scared.

We were told to give her Floradix and were sent to Children’s Hospital for more testing. That time between the initial diagnosis, the appointment at Children’s, and the time it took to get the additional testing back was agonizing.

Hurry up and wait.

Come to find out, she didn’t have alpha thalassemia. We were SO relieved. She was simply anemic due to really low iron. And we were told that it was very treatable.

The doctor chuckled when we told him that we’d been instructed to give her Floradix. He said, “That will do nothing for her. She needs pharmaceutical grade iron for three months, twice a day.”

He also said that the supplemental iron could cause extreme nausea. Great. So I’m going to have a sick and uncomfortable baby for three months. My heart was breaking.

We filled the prescription.

I took it home and placed a tiny – and I mean tiny – bit of the liquid on my tongue. OMG. It was awful. Just frickin’ awful. I can’t even explain it – it was like having a mouthful of pennies. Actually, much worse than that. So awful.

I bawled myself to sleep that night. How am I going to give my baby A SYRINGE FULL of this stuff TWICE A DAY?

I was scared to death that she wouldn’t take it, that I’d be force-feeding it to her, and that she’d have constant nausea for three months.

Not to mention, I wouldn’t be able to explain to her what was going on and why Mommy was giving her something that tasted God-awful and made her sick.

Lo and behold, my baby girl took it like a champ. Every time. For three months. Twice a day. She sucked it down like it was nothing. I couldn’t believe it.

For days on end, I braced myself for resistance and crying from an upset tummy. Nothing…

It just goes to show you that the body (even a little body) will tolerate what it needs. I likely couldn’t stand the stuff because of the concentration and because I’m not iron-deficient. But because she was so desperate for this important mineral, it was like drinking water.

I have low thyroid, with all

I have low thyroid, with all the symptoms you listed, but have too much iron.  I quit using cast iron and its helped, but will need to give blood regularly and offload some iron.  I've read that too much iron can be a cause for hypothyroidism as well.  What are your thoughts?

I have Hashimoto's (and Lyme

I have Hashimoto's (and Lyme - I'm in remission from that - long story).  One remaining issue is my ferritin.  While my iron levels are in the "normal" range, my ferritin is always low (20's).  I"ve tried everything ... Supplements, cast iron, blackstrap molasses, beets ... up to iron infusions.  The iron infusions helped tremendously, but over the months since we have stopped that, my ferritin levels have started to decrease again.  (1)  What can possibly be wrong?  I was told that iron infusions would then maintain my ferritin levels, as long as I continued to supplement.  (2)  Which iron supplement (floradix?  ferrochel?) will cause increase of ferritin without increase of overal iron levels.  As a side note.  I always feel suddenly much better when I have my once-every-three-months blood draw (which is something that would usually happen if I were overloaded with iron - not the case here).  Thanks for any input that you might have.

Might want to check for leaky gut - low ferritin can be a sign of this as the body is sloughing off the enterocyes (gut cells which have ferritin).  Leaky gut is common, some argue necessary, for autoimmune disease to occur.  Healing the gut can raise ferritin

I have Hashimotos and my

I have Hashimotos and my ferritin level is around 17. My doc said low is around 120. I had a endoscopy to check for celiacs disease but it came back negative. Today is the end of my mensral cycle and I'm laying in bed with fatigue and ringing in my ears. What could be cussing my issues? I eat meat and my menstral flow is normal only 5 days long. I just ordered your iron supplements. I forget to take my iron daily. But I do take magnesium faithfully at bedtime. B

Thank you for your comment. Your question and collection of symptoms represent a complex condition and cannot be answered responsibly on a blog comment. We’d love to help you – if you’d like to speak with one of our coaches, you’re welcome to schedule an introductory session via our Contact page.

Most healthcare providers do not have the in-depth level of knowledge that Jill has about Hashimoto’s, so it was a real relief to find her. She is very easy to work with and the way she approaches things is organized and easy to understand. I’m now doing great.