Is Wheat all that Bad? 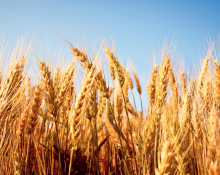 This post is an installment in our 52 Health Hinges series. Remember, “Small hinges swing big doors.”

It was my husband, in the kitchen, with the toast…

I have an admission. I used to think that all of this gluten-free stuff was unfounded, a fad, and made-up.

I couldn’t wrap my head around why so many people were “suddenly” allergic or sensitive to gluten. Growing up, I hadn’t known anyone who was allergic to gluten, so where was all of this coming from? At the time, I’d never heard of Celiac disease or other autoimmune diseases, so I simply didn’t get it.

Important note: This post doesn’t address the unique relationship and molecular mimicry between thyroid tissue and gluten and why those with Hashimoto’s, like those with Celiac, have a distinct reason to swear off gluten.

Anyway, I met Jill Grunewald, our Healthful Elements founder, in 2011 when I hired her as my health and nutrition coach. In the course of our work together, she suggested that I might benefit from doing an elimination/provocation diet in order to see what, if any, food sensitivities I had.

I thought it was such hooey that I poo-pooed her suggestion. It just didn’t resonate with me; I didn’t feel differently after eating gluten, so I didn’t feel that the elimination/provocation diet is where I wanted to spend my time and effort.

So imagine my surprise a year-and-a-half later when I realized that I was sensitive to gluten.

What made me realize the error of my ways? Two things.

First, my breakfast. I didn’t blow off all of the advice that Jill had for me…one thing that I had listened to was her recommendation to eat a good breakfast with plenty of protein.

During the week, I usually had scrambled eggs and plain yogurt sweetened with berries. On the weekends, when I’d have breakfast with my husband, we’d usually have a similar menu, the only difference being that he would also make toast. Slowly, I started noticing that I felt drowsy and stuffed up after breakfast…but only on the weekends. Hmmmm.

Separately, I’d received a book recommendation from the owner of an exercise studio that I attended. “Read Wheat Belly,” she said. “It’s a good place to start.” So I read it.

And it changed my life.

And now I invite you to read it, too.

(Quick definition break: in the book, Dr. Davis calls out wheat because it’s the main offender in the modern diet. (Plus, the title “Gluten Belly” just doesn’t have the same ring to it, right?) But wheat, barley, and rye contain gluten. When he says “wheat,” he does mean all gluten. I’m going to follow suit in this post.)

What’s the “why?” Let me share my favorite three benefits in eliminating wheat and gluten:

1. Wheat causes dysglycemia. As Dr. Davis writes, “Wheat products elevate blood sugar levels more than virtually any other carbohydrate, from beans to candy bars. This has important implications for body weight, since glucose is unavoidably accompanied by insulin, the hormone that allows entry of glucose into the cells of the body, converting the glucose to fat. The higher the blood glucose after consumption of food, the greater the insulin level, the more fat is deposited. This is why, say, eating a three-egg omelet that triggers no increase in glucose does not add to body fat, while two slices of whole wheat bread increases blood glucose to high levels, triggering insulin and growth of fat, particularly abdominal or deep visceral fat.”

2. Wheat is addictive and an appetite stimulant. My dad has been trying to manage his Type 2 diabetes and weight for…years. He always complains about how he is just so hungry, especially in the evenings. When he does eat something, he eats the whole thing (insert bag, box, bowl, etc.).

Do you relate? It’s not his fault (or yours). Dr. Davis explains:

“Modern wheat is an opiate.

“Wheat is addictive in the sense that the withdrawal process can be provoked by administering an opiate-blocking drug such as naloxone or naltrexone. But the ‘high’ of wheat is not like the high of heroine, morphine, or Oxycontin.

“This opiate, while it binds to the opiate receptors of the brain, doesn’t make us high. It makes us hungry.”

3. Wheat triggers leaky gut. According to Dr. Davis, “Recent research has fingered wheat gliadin as a trigger of intestinal release of a protein called zonulin, a regulator of intestinal permeability. Zonulins have the peculiar effect of disassembling tight junctions, the normally secure barrier between intestinal cells. When gliadin triggers zonulin release, intestinal tight junctions are disrupted, and unwanted proteins such as gliadin and other wheat protein fractions gain entry to the bloodstream. Immune-activating lymphocytes, such as T-cells, are then triggered to begin an inflammatory process against various ‘self’ proteins, thus initiating wheat gluten- and gliadin-initiated conditions such as celiac disease, thyroid disease, joint diseases, and asthma. Gliadin wheat proteins are akin to being able to pick the lock on any door, allowing unwanted intruders to gain entry into places they don’t belong.”

Within three months of cutting wheat/gluten out of my diet, I had lost the stubborn baby weight that had held on for too long (no matter how much I exercised), my skin cleared up, and most importantly and impactful – my mood lightened (I now recognize that I was suffering from postpartum depression).

Can you relate? Have you thought about going gluten-free but are overwhelmed?

Have you gone gluten-free and experienced benefits? Tell me about it!

My experience with Jill was life-changing. She is so genuine and her positive outlook is contagious. Working with her was the best gift I have EVER given myself!