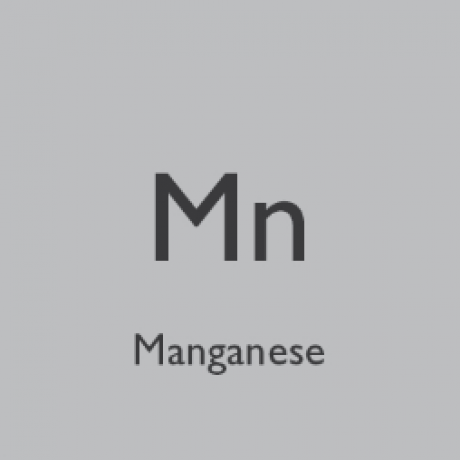 This post is the seventh installment in my ten-part Minerals and Your Thyroid series, where I’m highlighting eight thyroid-supportive minerals (iodine is two parts) and one troublemaker: fluoride.

Manganese. You just don’t hear a lot about it.

And maybe, when you’ve seen the word, you thought that the writer didn’t know how to spell “magnesium.”

The term is derived from the Greek word for “magic” and indeed, the ancient Greeks regarded manganese as having magical powers.

And it’s another “Goldilocks mineral,” where too much or too little can be detrimental.

Manganese deficiency can lead to:

Speaking of mitrochondria, manganese is required for the production of superoxide dismutase (MnSOD) – MnSOD is an anti-inflammatory and has a calming effect on the immune system. It’s also important for our mitochondrial antioxidant “security system.” These mitochondrial engines help us to produce heat and energy, which is especially important for those with hypothyroidism, given that fatigue and difficulty thermo-regulating (being cold all the time) are hallmark symptoms of low thyroid function.

Manganese is involved in thyroid hormone synthesis – it’s important for the production of T4. As you may know, much of our T4 needs to be converted into T3 and this T4/T3 conversion largely takes place in the liver. MnSOD helps to facilitate this activity. Selenium, which we’ll cover next week, increases liver MnSOD expression.

Other benefits of manganese include:

Manganese and Your Bones
I’m particularly interested in any nutrient that supports bone health. My mother ended up passing away early this year as a result of many complications from undiagnosed Celiac disease – she was diagnosed at the age of 70 because of her severe osteoporosis.

In that last decade or so of my mom’s life, although her doctor said that many of her bones were “like chalk” and she’d had many fractures, I still looked to the advice of my friend and colleague, Irma Jennings, the “Holistic Bone Coach.”

She continues, “Adding manganese to your bone food plan can boost the effectiveness of your calcium.

“Of course, I always get my calcium, manganese, and other minerals needed for bone strength through food. For most of human history we had no problem getting sufficient manganese for our bones. But that may be changing.

“According to a new study by Dr. Stephanie Seneff, pesticides in our food may be draining the manganese out of our bodies.

“Dr. Seneff suggests that glyphosate in Monsanto’s Roundup pesticide may chelate manganese in the body. In other words, it binds to manganese and takes it out of circulation. That disrupts your bone-building process.

“It happens when you eat foods sprayed with Roundup or eat genetically modified organisms (GMOs) that contain glyphosate. Our food supply is now full of glyphosate because Roundup is the most widely used herbicide on the planet. High levels are in GMO corn, soy, canola, cotton, alfalfa, and sugar beets.”

As if we didn’t need another reason to ban GMOs, which, as you probably know, don’t require labeling.

Hair Loss
As some of you may know, I have a passion for helping people with alopecia (autoimmune hair loss) – I’ve suffered from it for over 30 years.

I tell all my clients, when it comes to nutrition for hair loss, among other things, focus on minerals, minerals, minerals. I’ve primarily gotten on my soapbox about zinc (we’ll address zinc in two weeks) and iron/ferritin, but in researching for this post, I found this, from Dr. Jeremy Kaslow:

“Trace Minerals International of Colorado examined the mineral metabolism of 19 patients with alopecia (hair loss). The spectrophotometric analysis showed manganese deficiency in all 19.”

So I guess I’ll add manganese to the “high horse” list.

Manganese Excess
Let’s go back to this “too much” manganese thing.

While rare, manganese excess, mostly from overexposure to industrial pollution; overconsumption of coffee, tea, and chocolate; and excess supplementation can reduce T4 and T3 blood levels, which shows that both deficiency and excess of manganese can cause impact thyroid function.

Again, manganese overexposure is rare, but can also cause:

You know, I hate overthinking things as much as the next person. I like simplicity. And as I’ve plowed through this Minerals and Your Thyroid series, I’ve found that the interplay between all of these minerals is enough to make your head spin.

Yes, sometimes people have legitimate deficiencies that require supplementation, especially given that our soils aren’t as mineral-rich as decades past.

And I love the saying, “Don’t guess, test.” Or, “You can’t manage what you don’t measure.”

As far as manganese supplementation goes, Dr. Richard Shames suggests 10-20 milligrams daily. But you can likely get what you need from food (see long list below).

I’m inclined to think that the more we focus on organically-grown, whole foods, things tend to take care of themselves.

That said, here are some things to consider in relation to manganese and other minerals:

(Zinc is in the hot seat in two weeks.)

I know, this is a lot to think about. I’m not trying to add more to your plate. Don’t overthink it. I’m not going to. Just eat real food and supplement only when truly necessary. :)

* I’m not a fan of tofu. I’m not categorically against soy, but I believe it should be fermented, as in tempeh, miso, or natto, and only consumed in moderation.

How much manganese do you

How much manganese do you recommend per day for those of us with autoimmune issues?

Hi Christy, as it says in the

Hi Christy, as it says in the post, Dr. Richard Shames suggests 10-20 milligrams daily for low thyroid function. I don’t have any specific information or recommendation for manganese dosing for those with Hashimoto’s or other autoimmunity. Given that there’s a healthy list of foods that contain manganese, you may not need supplementation.

I cannot supplement with

I cannot supplement with manganese bec it causes my brain to become too forgetful. I noticed that whenI was taking it I had more energy. What can be taken instead that will help with the production of superoxide dismutase other than copper and manganese?? Thanks!

I have been drinking filtered

I have been drinking filtered threw manganese for about 9 months at 1.5 per million parts I' am 64 yrs. Should I be worried? thyroid or anything else?

My experience with Jill was life-changing. She is so genuine and her positive outlook is contagious. Working with her was the best gift I have EVER given myself!