This is Your Thyroid on Fluoride... 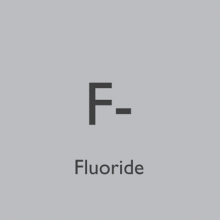 It starts on March 23: our all-new and updated Fire Your Thyroid online course for those with hypothyroidism and Hashimoto’s. Learn more >

This post is the last installment in my ten-part Minerals and Your Thyroid series, where I’ve highlighted eight thyroid-supportive minerals (iodine is two parts) and one troublemaker: fluoride.

See, even the chemical symbol has a negative sign in it.

Fluoride gets a big F. And an F- at that.

Here’s the short story. Until the 1950s, fluoride was administered to those with hyperthyroidism to suppress thyroid function.

You could stop reading right here. (But perhaps you’d like more information on where fluoride lurks.)

Before we dig in, this is the last post in a long Minerals and Your Thyroid series, where, up to this point, we’ve discussed all kinds of wildly thyroid-supportive minerals, like Calcium, Copper, Iron, Iodine (Part 1, Part 2), Magnesium, Manganese, Selenium, and Zinc.

(An iteration of these Minerals posts made their way into my best-selling Essential Thyroid Cookbook and its Companion Guide.)

Today, we’re going to discuss how fluoride is wildly unsupportive to your thyroid.

Fluoride as a Halogen
You may remember that we touched on halogens in this iodine post.

According to Dr. Amy Myers, “Iodine is part of the halogen family, which also includes fluorine, chlorine, and bromine.”

Fluoride is the negative ion of fluorine.

According to Dr. Mark Hyman, “Chlorine, fluoride, and bromide all compete with iodine during the production of thyroid hormones by the thyroid gland.”

Dr. Douillard says, “When iodine is low in the body, the other available halogens can uptake into and block the thyroid gland.

“Since fluoride has become a ubiquitous part of our food and environment, low iodine levels in the body in combination with excess environmental fluorides may cause fluoride to uptake into the thyroid. From there, it may compete with iodine and act as an effective thyroid suppressant, just like it did in the 1950s.”

Dr. Myers continues, “Fluorine, chlorine, and bromine are similar enough to iodine that your thyroid will suck them up and store them in place of iodine, effectively ‘displacing’ iodine.

“Of course, just because these chemicals look like iodine doesn’t mean they can be used to make thyroid hormones. If fluorine, chlorine, and bromine are displacing iodine, your ability to produce thyroid hormones is reduced, which can lead to low thyroid hormone levels and hypothyroidism. The higher the concentration of these chemicals and the lower your iodine levels, the more likely it is that your thyroid function will be negatively impacted.

“These three chemicals are now frequently added to our water, foods, and household products, and I believe this is one of the main reasons thyroid disease is now at an epidemic level.”

Know Where to Look
It’s important to know how and where you’re getting fluoride exposure. You’re likely absorbing more than you think.

Probably the most ubiquitously known source of fluoride is toothpaste and dental treatments. But it’s also in our water.

According to Dr. Frank Lipman, fluoride “is a poison being put into our drinking water” and according to this video from Dr. Lipman’s website, is a “disease-causing agent” and its use an “evolving social experiment.”

I think the thing that disturbed me the most about this video was the reference to using fluoridated water in making baby formula.

Dr. Joseph Mercola states, “There’s no doubt about it: fluoride should not be ingested. Even scientists from the EPA’s National Health and Environmental Effects Research Laboratory have classified fluoride as a ‘chemical having substantial evidence of developmental neurotoxicity.’”

According to Dr. Amy Myers, “A recent, large-scale study published earlier this year reported that rates of hypothyroidism in areas that added fluoride to their water system were twice as high compared to areas without added fluoride in their water.”

Other sources of fluoride include:

Your Thyroid on Nonstick
If you’re still using nonstick, the convenience of being able to slide your eggs out of the pan isn’t worth it.

According to Leah Zerbe, “PFOA is part of a group of problematic nonstick chemicals that fall into the perfluorinated compounds (PFCs) class, a family of fluoride-containing chemicals with unique properties that make products stick- and stain-resistant.

“In a study published in the journal Epidemiology, scientists found that more than 10 percent of people exposed to drinking water contaminated with perfluorooctanoic acid (or PFOA, made by DOW Chemical) reported having some manifestation of a thyroid problem.

“Comparing blood levels and years of exposure with incidence of thyroid issues, the researchers were able to say that higher PFOA exposure was associated with thyroid dysfunction. The study looked at more than 30,000 people.”

Nonstick cookware, while probably the most prevalent source of nonstick chemicals, isn’t the only culprit. PFOAs are also in:

If you’re still using nonstick, switch to cast iron, enamel, glass, or stainless steel. Quick-like. (I use mostly cast iron, for the added benefit of iron leeching into my food.)

Fluoride and Oral “Health”
Most European countries don’t fluoridate their water. And guess what? Their oral health doesn’t suffer.

We’ve been bamboozled into believing that fluoride reduces the risk of cavities and that adding it to our water supply is “for the common good,” but according to Dr. Myers, “Fluorine, in the form of fluoride … was supposedly added to promote dental health, but recent research has shown that fluoride does not actually decrease the risk of cavities in adults at any significant level.”

In fact, there’s evidence that too much fluoride can harm tooth enamel.

Other possible risks of fluoride exposure:

Before going gangbusters with iodine, you may want to read my two iodine posts in this Minerals series (1, 2). Iodine supplementation isn’t cut and dried.

But according to Dr. Douillard, “In numerous studies, iodine supplementation has been found to significantly increase in the urinary detoxification of both fluoride and bromide, thus taking a significant toxic load off the thyroid. In one study, only one day after supplementing with 50 mg of iodine, urinary excretion of bromide increased by nearly 50% and fluoride excretions increased by 78%.” (Don’t shoot the messenger!)

Thank you for being a part of this Minerals and Your Thyroid series. I hope that you benefitted from it as much as I enjoyed researching and writing it.

Hi Jill, thank you for your

Hi Jill,
thank you for your newsletters!  It's all great info.

I have only a small remark to this one about fluoride. I completely agree on not using the non-stick cookware. And I don't know much about cast iron. Just want to say that iron leaking from a pan is inorganic and will not be utilised by the body for good. All inorganic iron is stored in cells just like scrap metal in a factory. It only gets on the way. Once during a lecture about iron, I have seen pics taken under a microscope. I was very impressed with what I saw and since then never take any supplements containing iron. Just smth to keep in mind.
TGh

Thank you so much for all

Thank you so much for all this information you have made so freely available. Your dedication and commitment are much appreciated.

Thank you so much for this

Thank you so much for this brilliant series that summarises so well and succinctly how these nutrients affect and interact with the thyroid.  I wonder about the use of Ceramic coated non-stick pans, the ones that are free of all PFOAs and PFCs.  I have one and it actually works a lot better than the Teflon coated pans did.

I am very much looking forward to your cookbook - if it is as down to earth as these articles have been it will be very useful.

Hi Jill, Thanks for this

Hi Jill, Thanks for this wonderful series. I have gone through the deatils of  3M Aqua-Pure under sink filter however nowhere in their specifications it is mentioned that it filters fluoride? Can you please help clarify before I purchase this filter?

Hi Neha, here are the specs

Hi Neha, here are the specs from their website, where it mentions the filtering of fluoride: http://www.aquapurefilters.com/store/product/200005.200005/ap-ro5500.html

the iodine intake is the most

the iodine intake is the most contradicting and confusing. many theories promote iodine and some don't. but, the confusion comes with the food intake. foods containing iodine are on the list of those "good foods" from those who discourage iodine intake with hypothyroidism. and example is garlic. many contradicting theories regarding treating the cause vs. treatment of symptoms. as I have several auto-immune issues its difficult to to determine if my auto-immune disorders created my hypothyroidism or my hypothyroidism crated my immune disorders. which one should be treated and how. thank you for sharing.

Regarding chlorine, it was

Regarding chlorine, it was use as a water sanitizer during the Korean War. Soldiers were issued chlorine tablets to.kill bacteria in unsafe water sources . By accident soldiers who were killed in action, in their twenties had autopsies performed. Strangely, most had severe cases of atherosclerosis.  Further research shows a direct link.to atherosclerosis and consumption of chlorinated water.

As soon we started working with Jill, Holly’s eyebrows started growing back.