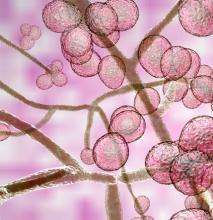 It’s strange that after 17 years of writing and blogging about health and nutrition, I’ve never written about candida (intestinal yeast). After all, I started battling my own candida a few years prior to going to nutrition school in 2005—and man, did I nerd out on it. It got a little obsessive.

This grueling protocol did help, but it ended abruptly one day at my health food store where I found myself in the jams and jellies aisle. I sat on the floor, crying, and that was the end of that. I bought three jars of jam, a loaf of bread, and went home and made toast for dinner.

What is systemic yeast (candidiasis)?

Candida albicans is a fungal organism that’s a normal and expected presence in our digestive environment. In a healthy microbiome, yeast is kept to a minimum and under control with beneficial microbes (including friendly bacterial flora (probiotics) and some beneficial yeast strains) and a strong immune system.

Problems arise—sometimes serious problems—when there’s an overpopulation of pathogenic yeast and it becomes opportunistic. Unfortunately, conventional medicine doesn’t recognize systemic candida as the acute issue that it can be. In fact, researchers found a link between candida overgrowth and Parkinson’s.

Candida overgrowth can erode the boundary between our gut and bloodstream and penetrate the intestinal lining, leading to—or exacerbating—intestinal permeability, aka leaky gut. It’s how the systemic nature of yeast—including the symptoms you see below—arises.

This is not only part and parcel of the onset of food sensitivities, but it’s also part and parcel of the onset of autoimmunity. Given that 70-80 percent of our immune system is in the gut and that it will identify undigested food and yeast as “invaders,” allowing any pathogen (including bacteria and parasites) to continue as a systemic presence can make it challenging at best to reverse any autoimmune condition.

We often think of “yeast infections” being vaginal or oral (thrush), but with the combination of fungal overgrowth and intestinal permeability, candida can proliferate and colonize in our tissues like the brain, skin, reproductive system, and hair follicles (becoming systemic).

Symptoms run the gamut and many are difficult to trace to candida:

This is quite the list, no? How many of these symptoms do you identify with?

While any one of these factors can cause candida to proliferate, it’s often a combination of:

These circumstances could also be historical. In other words, many people who’ve “cleaned up” their diet still struggle with yeast. Same goes for the medication use, especially the birth control pill. Many women who’ve been off the pill for years are still harboring yeast.

Part 2 of this blog series has a specific section on antibiotics.

Digestive symptoms such as gas, bloat, gut distention, and gurgling occur because yeast overgrowth causes fermentation of our food vs. digestion. It ferments sugar (glucose, fructose, maltose, dextrose, sucrose) into alcohol, dysregulating blood sugar, which makes us crave what? More carbs and sugar.

Most of us have had a hangover at some point, with its brain fog, headache, and fatigue. This is due to elevated acetaldehyde, an organic chemical, which is actually quite present in our environment (synthetic fragrance, tobacco smoke, air pollution).

Again, an overabundance of intestinal yeast can trigger fermentation—sugar and simple carbs are converted into alcohol, contributing to elevated acetaldehyde levels. This is also why many with more advanced candida overgrowth have slurred speech/“thick tongue” (and a white tongue to boot), and act, well, intoxicated.

In fact, if there’s enough fermentation, it can raise the body’s blood alcohol level beyond the legal limit for operating a vehicle. A rare condition called auto-brewery syndrome essentially makes the gut manufacture its own beer.

Kinda funny, but this is serious business, as acetaldehyde has been linked to neurotoxicity and nonalcoholic fatty liver disease and is possibly carcinogenic.

I’ll never forget what I heard a functional medicine doctor say many years ago. I’m paraphrasing here, but, “Anytime a woman walks into my office complaining of hormone related symptoms, the first thing I do is put her on a yeast cleanse. Everything becomes easier after that.”

A statement by Carolyn Dean, MD, ND is also branded on my brain, which is, “The toxins that yeast produces block proper hormonal pathways.”

Indeed, I’ve seen remarkable things happen with my clients after a yeast cleanse. In addition to alleviation or near-alleviation of the symptoms above: PMS…gone (including bloat, cravings, and irritability). Cramping…gone.

To elucidate just how remarkable this is, I’ve worked with a handful of clients whose menstrual cramping was so severe, it led to vomiting and missing work due to being bedridden for a day—sometimes two days. After doing a candida cleanse, these women became completely cramp-free.

Not to mention, any infection is a stressor for the body. When we think of stress, we often think of mental and emotional stress, but food sensitivities and infections can be a major burden on the body, contributing to overproduction—then, as things smolder on, possibly underproduction—of cortisol (adrenal burnout).

There are also many reports of women who’d struggled with infertility getting pregnant after doing a candida cleanse. Keep in mind, you don’t have to have chronic vaginal yeast infections to have enough of it in the vaginal canal to disrupt your pH, which can not only have a negative effect on healthy vaginal flora, but can also create a hostile environment for sperm. Sperm require a specific pH to survive and the presence of yeast can cause sperm die-off prior to reaching its intended destination. If the sperm can’t reach the egg for fertilization, conception is a nonstarter.

This is but one reason why I cringe at the “unexplained infertility” diagnosis that so many women blithely receive. There’s always a reason.

And men, you’re not off the hook here. Candida can cause semen candidiasis, which can not only infect—or continue to infect—a woman’s vaginal canal, but the yeast itself inhibits sperm from meeting the egg. According to this abstract, semen candidiasis is “the most important sexually transmitted fungal infection; this microorganism affects male fertility potential and could alter oocyte fertilization.”

If anyone reading this knows of someone struggling with infertility, you may want to share this with them. While I can’t claim a slam dunk here, this is a serious and often overlooked factor in infertility. Ladies, I feel that it’s critical that your male partners perform a yeast cleanse alongside you. Otherwise, you could end up passing candida back and forth.

In Part 2, we cover antibiotic use and candida, the yeast/alopecia association, testing, cleansing, and heavy metals.

Dear Jill, I bought your homestudy course few weeks ago. Yesterday, I read the last page and tears of joy started coming down.